I must say that I’m happy with life.

I’ve been lucky and I’m grateful for everything that’s come my way. I enjoy my career and I’m good at it. I live in a lovely home and I’m healthy. But sometimes things we take for granted come to light. I had a feeling about a year ago that the little grey and white cat that I’ve loved for the past 12 years wasn’t going to last as long as I’d hoped he would. I don’t know how I knew, but I did.

We all know that most pets won’t be with us an entire lifetime; they simply don’t live as long as we do. That doesn’t mean we don’t become attached but let’s face it; none of us are getting out of here alive.

That being said, we can talk practical and logical all we like but as emotional beings, we face the pain of losing that which we love. Pets are particularly important to those of us who are alone, single and childless. Many don’t understand and there are plenty who don’t like pets and would never have one. But for those of us who were fortunate to bond with a little furry friend and experience that true unconditional love, we can’t gush enough about it. It’s the most wondrous thing as they are the most beautiful of souls.

Let me tell you about Zephyrus – because he’s really all that and no matter how old I live to be, I will never be able to love as effortlessly and purely as he does. Our pets are like Angels if you believe in them, purest of heart with the innocence of a new babe.

Years ago, I volunteered at the MEOW Foundation. Every Saturday morning I’d go there and clean, feed the cats and, of course, visit the kittens if there were any. I was newly separated from my husband and well…let’s just say he kept the cat. I thought I should adopt another but in a place with over 100 cats, it’s a hard choice.

One fine morning, I saw him. He was lounging on one of the cat trees, napping. I think he was probably about 9-10 months old at the time. He was lovely and I’ve always adored long-haired cats. I didn’t know his temperament but knew how to find out. I went over, picked him up and flipped him on his back in my arms, cradling him like a baby. I wanted to find out if he’d attack, freak out or simply relax.

He did a few things, first he just stared at me and then he thought to play bite and make a game of it. When I didn’t put him down, he relaxed and started to purr – very loudly, I may add. He gazed up at me with those massive yellow-green eyes of his in adoration as I rubbed his belly and I knew he was mine.

The first night in his new home was quite interesting. He was naturally scared and spent several hours hiding in the guest room closet. I’d bought him various toys, a new cat tree, litter box…the lot. I silently prayed to all the cat Gods that he’d use the litter box and would be okay in his new home.

Sometime in the middle of the night, perhaps around 2:30-3:00am, I was woken up by something very odd. It seems something was in my bed and they were jumping about and causing quite a stir. I knew it was him but instantly worried he was having some sort of seizure or perhaps conniptions yet…he wasn’t making any noise; most peculiar!

Swiftly and gracefully I turned on the bed light.

Alright, that’s a lie. I was half asleep and stumbled around for what seemed an eternity, knocking over a book in the process.

What I saw was nothing short of adorable and quite funny. He’d carried up about 3-4 of his new toys, one by one, into my bed and was having a little party. I guess he wanted to play (being still a kitten and all) but didn’t want to be lonely and all by himself in the process.

So there he was, picking up catnip mice in his mouth and tossing them into the air where he’d pounce on them, knock them off the bed and then jump down to retrieve them and start the process all over again. He stopped when I took notice…but only for a moment. It seems, his toys and play time were far more important than his new mistress’s sleep.

Eventually he settled down against my feet …I put his toys next to him in the event playtime would present itself, once more.

He’s nearly 13, now and has kidney failure. I may have him for another year…or another month; it’s hard to say. In the meantime, I will cherish him, every day. He still sleeps on the bed, but has moved up in the world to claim the entire other half. On the occasions where I’ve had boyfriends, he’s been gracious and moved back to snuggle up on my side or resided down by our feet…but he still sleeps with me and always will.

Once, someone asked me, I believe it was my mother, how much I’d spent on vet bills and his keep over the years. I can guess and think it would be the following:

What Zephyr has done for me: 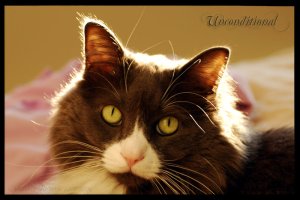